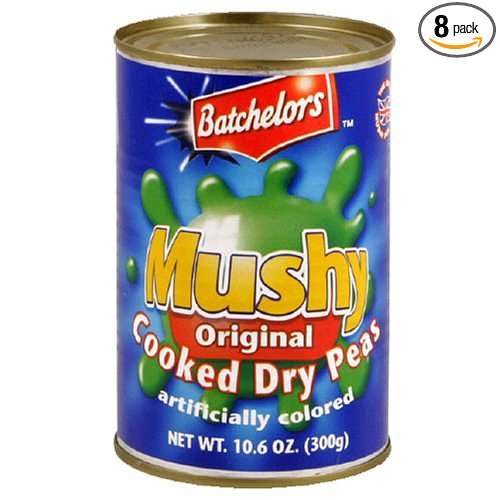 Arguably one of the best brands of peas is Batchelors Canned Mushy Peas.

Batchelors Mushy Peas in a can are a high source of protein, have virtually no fat, low sugar and no preservatives, and are totally vegetarian.  The can consists of dried marrow fat peas which have been soaked overnight and then boiled to mushy perfection!

This listing on Amazon is the best deal to be found for legitimate mushy peas – A pack of eight, 10.6-Ounce mushy pea cans (total of 84.8-Ounces) for about $27.

As one reviewer states about these mushy peas . . . “So far as I know this may be the only outlet for affordable mushy peas in the U.S. I have been subscribing to these 8 packs of cans for the past year, reordering when needed.  Batchelors peas are really tasty and great for having as a side with some fish and chips at home. ”

So if you’ve been searching for where to buy canned mushy peas, there ya go!  Buying mushy peas in a can first is also a great way of getting started, before preparing from dried peas or growing them.